The future is determined by those who get involved.

Tatjana shares her experience of bringing a friend to Carrick

I migrated to Northern Ireland from Australia with my husband in July 2019, arriving just eight months before the Covid-19 pandemic.  We chose to live in Carrickfergus because of its location, which we thought offers the best of both worlds: small town living by the sea with an easy commute to Belfast.  It also looked like a good base from which to access the rest of Northern Ireland and, especially, the north-west region where my husband was born and raised and where his family still live.

My new friend took the time to show me around in my early days, but they tended to take me out of Carrick to show me the best of what County Antrim has to offer, whether it was a hike in gorgeous Glenariff Forest Park, or a trip into Belfast for dinner and a show followed by late-night drinks, or a café in Larne that they warned me is a ‘dive’ but, arguably, has the best Ulster Fry!  In our conversations, I would learn more about the places we visited and my friend’s life in Northern Ireland, which served to deepen my understanding of people and of place.

The best part was then telling my husband (who was busy working, while I was still looking) about the places I’d visited and what I had learned that even he didn’t know as a native Northern-Irish man, or that he had missed out on while living in Australia.  On the weekends, we’d go to the places that my friend had shown me, so that he, too, could share in the joy of ‘discovering’ Northern Ireland with fresh eyes.

As my life grew in Northern Ireland, it grew in the direction of Belfast.  Participating in arts and culture is important to me, but I struggled to find it in Carrick and, instead, found it in Belfast.  I joined groups and met new people and, in time, these people became friends who showed me around Belfast ‘through their eyes’.  Not the Belfast you read about in the media or learn about in the history books, but the Belfast they live in: the places they go, the things they do, the people they know, the hidden treasures they love.  The local knowledge and lived experience of Belfast, which varies according to each person and their own take on the place.

Soon I found my own stomping ground within Belfast: places I liked to go, things I liked to do, people I met up with and, eventually, the place I worked.  Carrick receded into the background of my life and, at times, I wondered whether it would be worth relocating to Belfast instead.  But then the pandemic arrived and life became constrained to the home, as it did for all of us.  For me, this meant Carrick. 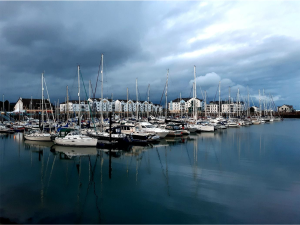 It was at this time that I realised that I had made little connection to Carrick, aside from getting my groceries as needed and the occasional treat at a local café prior to lockdown, and it was because I had made no connection to the people living here.  So, when my husband told me about a group he had come across on Facebook called Positive Carrickfergus, I immediately joined.  And when I heard about the ‘Wildest Dreams’ postcards and the opening of the new Talking Shop, I decided to join the conversation in person.

One of the first events held by Positive Carrickfergus after we emerged from lockdown in Summer 2021 was the ‘map making’ workshop.  The workshop involved a group tour of the town with local historian, Laura Patrick, followed by a creative map making exercise, in which we were encouraged to visually ‘map’ our experiences, thoughts, feelings, ideas and hopes for Carrick, from our own perspectives.  The workshop opened my eyes not only to the history of the town, but how it is experienced today, and what potential it holds to make it a great place to live or visit.

The workshops also gave me the opportunity to meet some locals as well as people who had grown up here and spent some time away before returning, often with new families.  They all had stories to tell about Carrick that you don’t read about in the history books or tourist information or the media, and although their stories may have differed according to their individual experience, they all shared one thing in common – a great affection for Carrick.  It drew me in.

I started to think more about how I was living here and what I could do to contribute positively to Carrick.  How I could engage more with what was available in the town and its surrounds, what local businesses I could support, what personal skills and resources I had that I could share in the interests of the town, and how I represented Carrick to those not familiar with the place aside from what they may have ‘heard’.

The idea of ‘Bring a friend to Carrick’ came up in conversation with Lee Robb one day.  Not just having friends visit me in Carrick, but giving them a personal tour based on my own experience, knowledge and feelings about the town, and inspired by the ‘map making’ tour I had taken part in.  I thought it was a great idea given that this is exactly how I had come to know and love places in Northern Ireland so far, and that I keep going back to.

It wasn’t long before the opportunity arrived.  I collected my willing friend at the Carrickfergus Train Station on an early Friday evening and we set off on foot, tracing the streets of Carrick from Shaftesbury Square to The Courtyard, around Marine Gardens and the Town Centre, by the Castle and the Harbour to the Marina and, finally, dinner and drinks at the Windrose.  We walked and talked as friends do, while taking in Carrick.  I pointed out places of interest and things that I love about Carrick, and relayed interesting stories I’d gathered from locals or from my own experience, while my friend asked questions, lent her impressions, or followed trails that piqued her curiosity.

A few days later, I asked her to give me a review of her experience and this is what she had to say: ‘

I found Carrick to be the sort of place where having a guide made all the difference as much of what makes it unique is subtle and easily overlooked.  I loved the ‘postcard’ entrance ways, walk throughs, windows, gaps – lots of images framed by the architecture. I think I would have missed some of the passageways into courtyards, if you’d not pointed them out. It seems like a place that has seen investment (the pavements and roads are well maintained, flower baskets aplenty), but being there on a Friday evening was pretty dead, so it was lacking a bit of life. Very much enjoyed the marina area too – felt worlds away from Belfast harbour! Very easy train ride from Belfast too.’

My friend’s review is not too different from locals’ views on Carrick I have heard before – that Carrick has so much going for it, but is missing a sense of energy or activity about the town.  There’s not much going on to bring people in and together unless there is an event taking place, but the town has a lot of potential to work with.  I think that’s the point of Positive Carrickfergus, to get people who live and work here involved in creating the changes we want to see in this town.  And this starts with joining in the conversation.

I enjoyed giving the tour to my friend as it made me realise how my connection to Carrick is growing and how, like the friends I have made here, I am keen to see the place flourish.  The morning after the tour, I posted a photo of one of the stops we made on my private social media account.  Another friend I met up with in Belfast later that same day immediately asked me: “Wow! Where is the place that you posted a photo of this morning?  I want to paint it!”

“Carrick!?” she asked, rather surprised.

“Yes, Carrick!” I laughed.  “You should visit me sometime – I’ll show you around!”

Back to All Posts ›